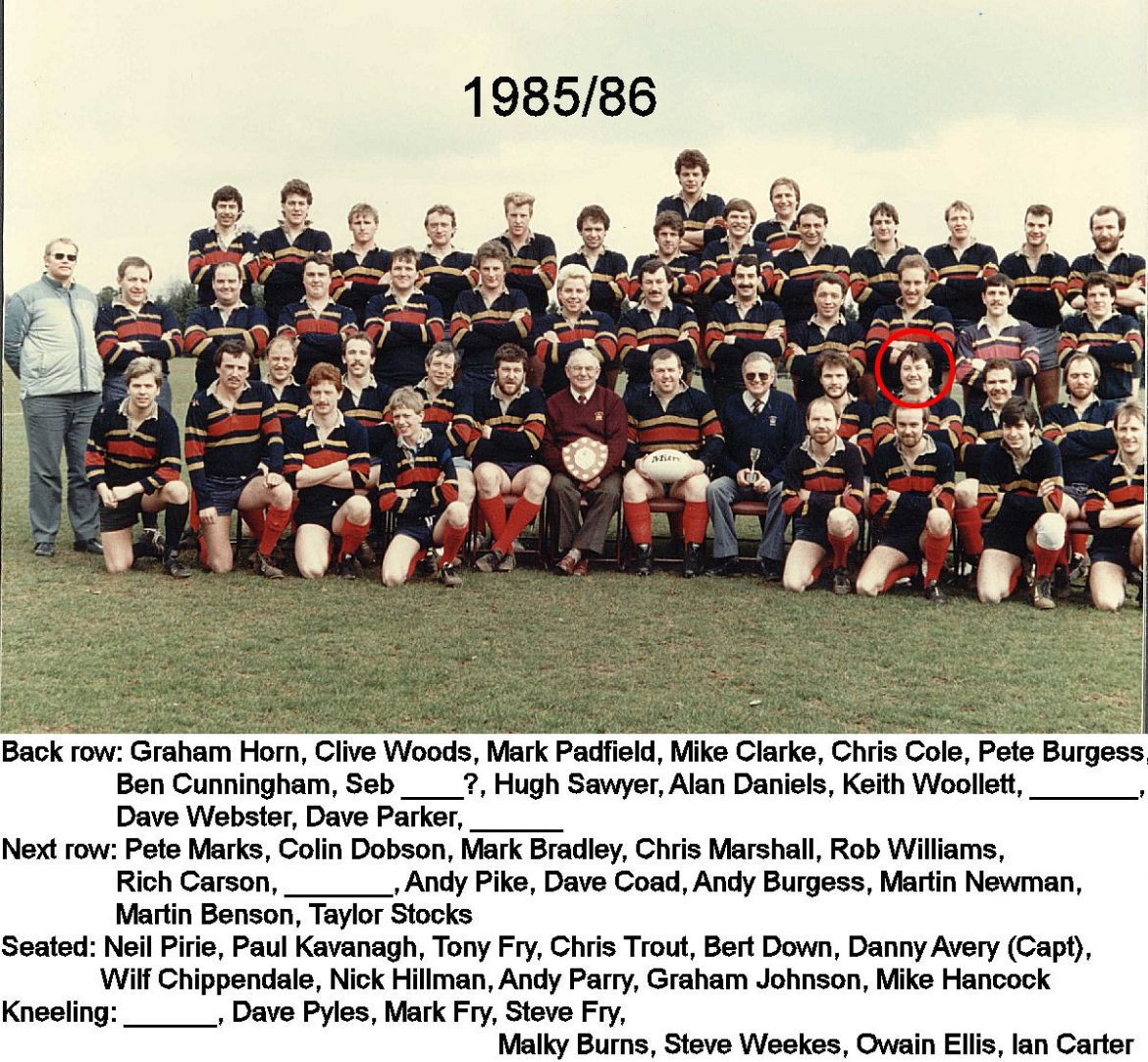 Our first VP story of 2019 comes courtesy of Andy Parry, who played for Sarries between 1982 and 1987. If you have a rugby story you’d like to share, send us an email at mail@bathsaracens.co.uk

I first picked up a rugby ball when I was around six years old, and boy you should have seen me run, legs pumping like mad and a knot of excitement in my tummy, sweat on the brow – well to be honest I was trying to pinch the ball from some big ten year olds at the time!! When my father picked me up from hospital he decided it would probably be best to enrol me in the local mini rugby side before I could get into any more trouble. From thereon in I played for Kircudbright Academy and Stewartry in the south west of Scotland. I was selected to appear at the Scotland U16 trials in Jedburgh at the age of 14 but was rejected due to the fact a very big 15 year old ran right over the top of me leaving nothing more than stud marks on my forehead. I was not invited the following year, I think it was because at the age of 15 I discovered the wonderful engaging powers of alcohol.

Five years later in 1982, I was sitting very quietly, minding my own business in a corner of a pub which was known then as the Beau Nash Tavern in Bath. It was a quite autumnal Saturday evening, I had just arrived in Bath from Sheffield so I was reading some leaflets that were trying valiantly to exite me into the history and culture of my new adopted home town. When in through the door crashed these big, loud apeths demanding several beers from the poor slight figure of the landlord. It became quite quickly apparent that the newly aquired refreshments were to top off the many they had already consumed at other establishments. Mainly due to fear of their size, number and many facial disfigurements I pretended not to notice them but as sure as drizzle in Scotland they sat on the surrounding tables where they continued to exhault the heroic exploits from earlier that day. Oh the tales of tries, tackles and sneaky punches in the rucks and mauls were flowing thick and fast, then a song about a rolling silver something or the other, I couldn’t quite make it out. Spurred on by the conquest on the field of play and several more beers this group of gladiators, who had now increased in number, were extending their recently found testerone fuelled confidence into the arena of all things nocturnal. I then assumed that the female species of Bath were not that fussy which was good news for me!! And then it happened, I don’t know why I did it but I guess it is what they now call a blonde moment I uttered the astonishing question: “So you lot are rugby players then?” Well done Bamber Gasgoine nothing gets past you I think was the general response. Trying to retrieve the situation I said “I used to play a little rugby” which illicited the right response especially when they found out I had just hit town. Before I knew it a beer had been placed in front of me with instructions on who I should contact to join in this group of hellraisers. My decision to join was hastened by my introduction to the Bath CSRFC lady followers who joined us later in the same establishment. “My” I said how they can talk, and in most cases I don’t believe they have ever stopped!

Any old boys reading the above you know who you were!!!

And the rest as they say is history.

Played for Bath CSRFC between 1982 and 1987 when I had an unfortunate injury that meant the very last game I would ever play was for that side. In the intervening 5 years I joined the committee as the social secretary and instigated the ‘Gentleman’s Smoking Evenings’ (which I am not proud of) which was one of the biggest fund raisers in the year, funnily enough. Of course the wives and girlfriends were outraged and stood up to me saying “this is disgraceful when will we get the chance to feel some prime rib” so along came the “Ladies Night” which by all accounts were even wilder and looking at the state of the acts when I had to pay them afterwards I believe it. (Poor devils).

When I left Bath I used to be a regular tourer in the social capacity of course, but due to my job taking me to the USA for long periods of time I have not been able to join the lads for many years. I hope to rectify that soon by joining you once again in the next few years.

Finally I wish Bath Saracens all the best in the coming seasons.