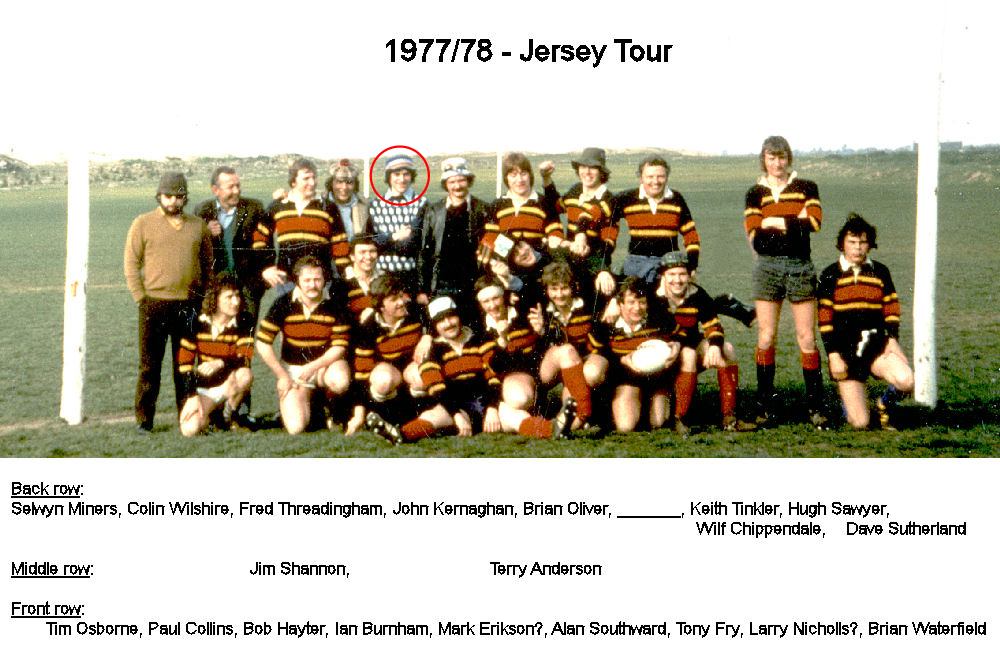 For our next VP story we hear from Brian Oliver, whose playing career began in 1975. Share your rugby story with us at mail@bathsaracens.co.uk

In 1975 I joined the CSRFC under the advice of a mate – “don’t sit in the pub every night, come rugby training”. Great idea – beer consumption increased overnight! I was taken down John Moore’s and came away with a full set of kit and a “Rugby – Know the Game” book. Reading the book I found out there were 15-positions (something that would come to haunt me later) and I asked my mate where should I play – “Say you’re a winger” was the advice; I forgot to ask left or right. I turned up to training with John Carling as captain and was warmly welcomed into the club, which appeared short of 1-winger at the time, and was I available on Saturday?

So began my career with the CSRFC -(sorry the old name continually slipped-out towards the end of my playing days and still does on the touchline). “Rugby – Know the Game” was a great little book with an overhead pictorial of the players on the pitch. The game started and the 1st scrum was on the opposite end of the pitch to the book’s diagram – “Shit where do I stand?”. I managed a try that season collecting a 1-yard (forward) pass from John Carling; was I really that quick and did I have great rugby vision after all? Luckily I did not air my thoughts with my playing mates thus avoiding ridicule and disappointment. My 1st Toor was to Cumbria and I quickly discovered that you had to be in front of Selwyn if you wanted any food – especially if pies were on the menu. How I miss those cold baths in converted cow sheds, balls that were impossible to hold onto on a wet day, players turning up with newspapers for shin pads with kit in a cardboard box, Fred’s Team shampoo that lathered like anti-freeze (having the week before sold us anti-freeze that lathered better than shampoo).

Playing highlights; as a game the Toor to Amsterdam when we went over with 15 players including a mate of Kav’s who won his Toor costs on the boat’s roulette wheel, and a player without boots but a snappy line in daps (ps your wife’ll never know you played!). On the pitch we got a match where 15 over-age opponents were on the pitch so we hastily got changed. I hung my personal club jersey on my hook only to find it missing after the match, but returned by Ray Waters who had worn it throughout with me tearing it apart while hooking, with him as prop. The match in the final few minutes with a superb 8-man effort from our front row lifting the whole of theirs, the ball being won against the head and after a back move we scored & won the game; massive & what a piss-up – you cannot beat the Dutch for overflowing hospitality, a love for the game and their size, but luckily they do not know the finer points of the game. Making it to the first team was a privilege, highlights of being in the 1st professional year (strangely I remained unpaid). Being leading points scorer in one season, (well for 20 minutes in the 1st match of the season – the perennial Tor game – by taking a return pass from Jim Bentley having thrown him a quick line out at the front and sprinting 25m for a flying touch-down); don’t recollect scoring again that season, so probably finished bottom points scorer.

My points tally would have been something worth talking about apart from two things, tries were only worth 3 & 4 points before they became 5 during my career, and I never was that good.

After-match memories are numerous especially in the halcyon days of singing and no drink-driving laws; chasing Wilf’s lobster round the bloody room and Pylesie’s Alabama renditions loom large.

Due to inheriting the wrong genes I have the rugby ability of a front row forward but the physique of a winger. It took the club playing me in every position in the 1st Team to realise this and I continue to wear my club jersey with the number 120 (the sum of all positions, for those of less intellect) presented to me by “Buggy” in his captaincy. I found my niche on the field, how fondly I remember lining up as tight-head against “fat Henry” (who was the weight of our combined front row), and what was I doing standing in front of him at their first penalty, which they called as “fat Henry” – how original! Luckily I remembered John Cooke’s tackle-method and threw myself on the ground for him to topple over, unfortunately he was moving slowly and just landed on to me.

There are few photos of me about – if you do spot any I’m the one with long black hair – those were days where you didn’t need a scrumcap to protect yours ears, you just grew your own.

Current status; still turning out for the CSRFC (skittles team that is – and now Captain).