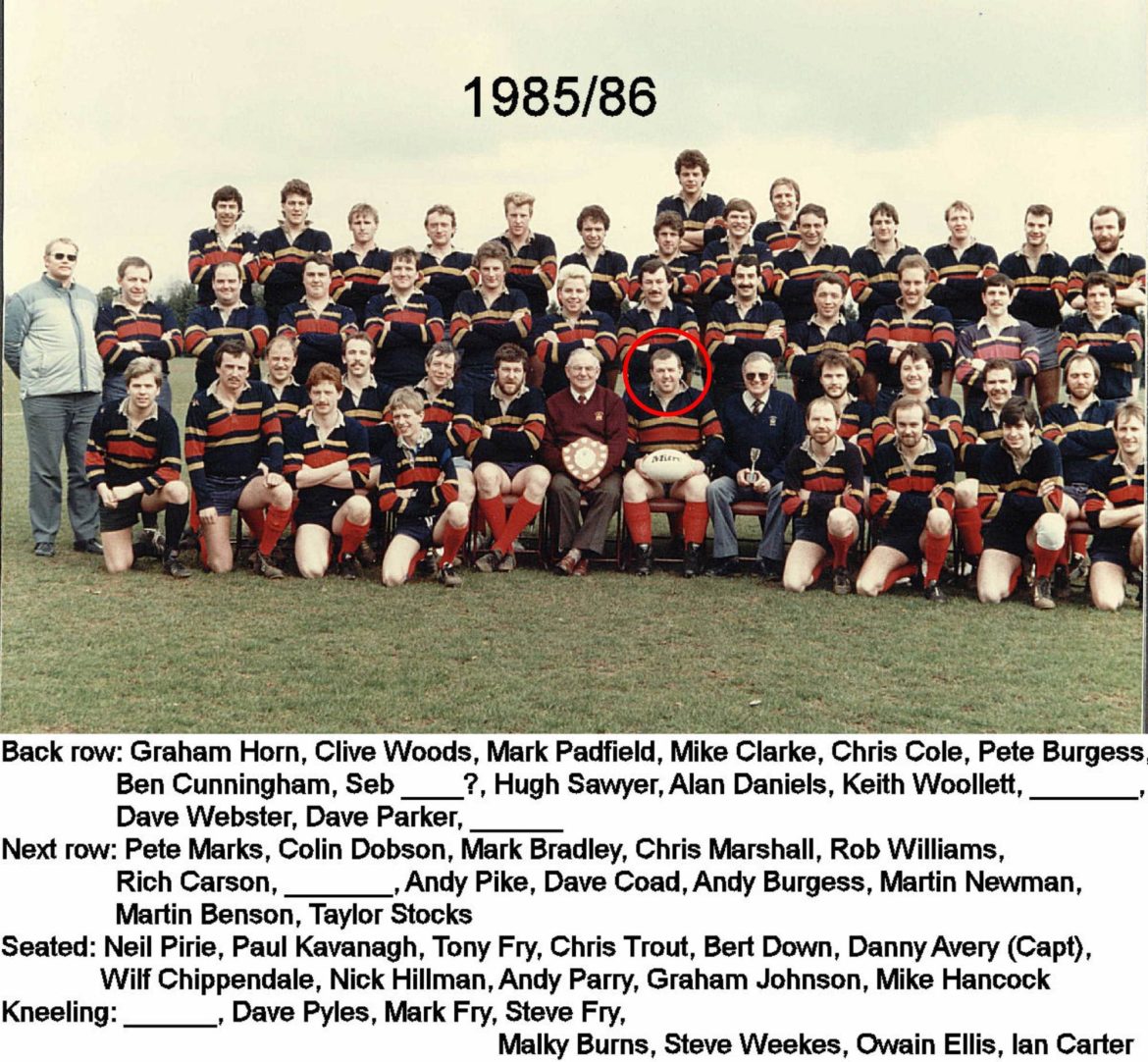 Our latest VP story is from Danny Avery, who captained Sarries between 1981 and 1987. Have a story you’d like to share? Send us an email at mail@bathsaracens.co.uk

I first starting playing Civil Service Rugby in 1972 not for Bath but for Plymouth where I was born and lived. I joined the Dockyard as an apprentice and was at college when approached to play for Civil one cold and wet Saturday. There were soon links with Bath Civil. Alan Mansell and Dave Atwill had spent time at Foxhill and played for Civil whilst on detached duty. There were the inevitable tours then between the 2 clubs and friendships were formed and needless to say much beer was drunk. I will need to scour the attic to find photos but stories about tours will need to wait another day – although memories of preparing to leave the bar at BCSRFC late one Sunday afternoon to return to Plymouth only to find that the coach driver couldn’t stand up is memorable!! He was stripped, thrown in the showers to try and sober him up but all to no avail. A new driver was summoned from Plymouth. Needless to say there was much disappointment at having to stay another 4 hours!

It was during these times that I first met guys who little did I know then would become my friends for years to come. Terry Brien, Tony Fry, Hugh Sawyer, Selwyn Miners, Wilf Chipp. Hamish and Cloughie (God bless him) to name a few.. My brother and some of his entry again from Devonport spent time at Foxhill and played for the club late 70’s – Gary was sometimes known as `Warbs`… Neil Hopkins, Keith Potter, Glen Lathem, Bob Thompson all turned out for the club.

Well as fate would have it I was promoted and posted to Foxhill Jan’79. I commuted weekends for the first 6 months or so and continued to play for PCS. It was early during this period whilst lodging in the `Della Rosa` near the Hadley Arms that I met my buddy John Cooke purely by chance, I teamed up with him and the long winter evenings wern’t so bad after all………..

Rugby in Plymouth was very strong at the time when I decided to commit to BCS. John Cooke had also been playing a high standard at home in Brecon. I think it is fair to say that Bath CS were struggling on the field and also with nos at training. The fabric of the club was sound and well run and included the stalwarts such as Terry Brien, Tony Fry, Ian Burnham, Vince Philips, Duncan Spence, Barry Clough, Hugh Sawyer, Selwyn Miners etc. We needed to focus on the playing side starting with fitness, playing method and whole approach to the game on the Saturday….trying to change the Friday drinking culture was a challenge!! The club was always well led from the top and I’m not talking about Captain here. Bert Down and Wilf Chippendale were my Chairman and President during my spell as Captain and I owe much of my success to them and I am indebted to the quiet times I was able to talk, listen and learn from them. Also a mention should go the numerous woman that always supported and worked for the club especially Karen Cadywould (later Cooke). Senior players such as Roy Mc Cullough, Colin Dobson and Tom Doughty willingly assisted me and JC with coaching.

The club already had some good players who perhaps at this time were not playing to their full potential – Mike Clark, Andy Pike, Andy & Pete Burgess, Martin Benson, Roger Gould, Dave Beveridge, Malky Burns, Nick Osbourne, etc. Training and performances soon improved and the influx of new players began mostly press ganged from out of the MOD establishments and of course the pubs! Neil Pirie, Taylor Stocks, Billy Cain, Ian Lorimer, Paul Hawes, Nick Hillman, Davy Parker, Chris Kearns were all good young prospects we recruited. New more established players also joined or came back to the club and added to the strength, I’m thinking of the likes of Davy Watts, Bob Hayter, Alan Southward, Dan Doxie, Eddie Thomas, Pete Marks, Andy Pike and of course my partner in crime in the Front Row Graham Johnson. (My thoughts at this time go to Graham, Barry Clough and Dave Coad – all players and great friends whose lives were cut short shortly after I had returned to Plymouth. I enjoyed their company and friendship and will remember them forever). I was fortunate to Captain 3 very talented players during my time John Cooke was a natural in every thing he did on a rugby pitch – but he hated training !! Chris Trout (from Plymouth CS) joined towards the end of my time and improved our back line. But undoubtedly the person who had the biggest potential to play at a much higher level was Paul Kavanagh he had such an influence on any team and dragged others along with him. It speaks highly for the club that a player of his talent chose to stay at Civil/Saracens. He was a pleasure to captain and it’s great to see he has put so many years into the club.

There are so many players I haven’t mentioned, for that I apologise. I have so many fond memories that I could write a book and maybe one day I will.

Many thanks to all of you who were associated with the club and helped to make the 7 years at Bath so special.

I returned to Devonport in 1987 carried on playing and coaching Civil in Plymouth until this year. Sadly the CS Club is due to close in September this year. The rugby club is in a state of uncertainty not sure where its home will now be.

I’m still married to Kath, and work in the Dockyard building lifeboats for the RNLI. We have 3 grown up children, Kelly and Dean were born in Bath, Karlie in Plymouth. Dean is a far better player than I ever was, he is a hooker and last year played for Devon U20s and Plymouth Albion’s development side.

Depending on circumstances I would love him to play in the blue, red and gold, maybe guest in a President’s v Chairman’s game one day.